Getting to know - Paulo F. Oliveira 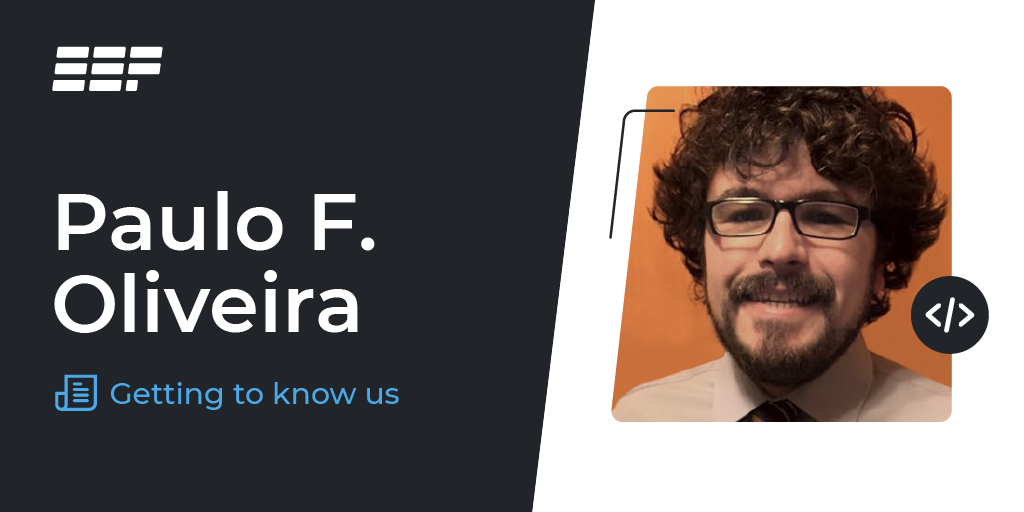 Welcome to another edition in our getting to know us series. Getting to know us consists of articles and interviews about a wide variety of people in our ecosystem, with the main goal of making their work with BEAM technologies visible. Some have been around a long time, while others may seem new to you, but they all share a love for this ecosystem. If you know of interesting work that deserves more visibility, let us know at marcom@erlef.org!

Paulo F. Oliveira is a Portuguese software developer and a member of the Erlang Ecosystem Foundation. With a career spanning over 17 years, he has worked on the most diverse projects: from mobile games backends and internet portals, to NATO port surveillance systems and helicopter engine software, to space projects. And today, we got to know him.

Could you tell us a bit about yourself and your early years?

I was born in Covilhã after my family came to Portugal from Mozambique, and almost immediately I moved to Santo André, next to the sea, where I lived for the first 20 years of my life. I left Santo André to go to the University of Algarve, where I studied Computer Systems Engineering and where I got really interested in software development. It is also where I realized that it was not as difficult as I thought it was. My final thesis was a parser/lexer for Fortran targeting parallel image processing on Beowulf Clusters (SPMDdir), for which I wrote a paper on. I then went to work for SAP. About one and a half years later, I quit: I became more interested in software development there but not equally interested in the product. I continued learning programming by myself (it was not the main focus of my degree), mainly using Java, PHP, and MySQL. I even created a small blog software at that time. Then I had the opportunity to work for Opensoft, where I worked on a logistics management system that integrated with SAP. I was developing the portal and backend in Brazil, where I lived for 2 years. After this, I moved back to Portugal and got into Edisoft; they do a lot of things, mostly state-related and heavy-duty systems: systems for the navy, for space, for geographical databases, and so on. They work with embedded systems, so I got to learn a lot with them. During this time, I moved to France to work for Turbomeca, where I worked in the software department specifying and testing software. Two years later, I got involved in the development of said software and stayed in Portugal for 3 months until a new opportunity came up to work again in France for the same people, but at a higher level: I would continue specifying and testing systems but also developing software. This is where I got into contact with “esoteric” languages like DXL, and systems like ClearQuest. In 2008, the economic crisis struck, Edisoft was basically forced to give up the project and I came back to Portugal, to the headquarters, where I started working in the development of a complex port surveillance system. After a while, they proposed that I move to the space department, where I did software in C for embedded software for satellites, with a system called RTEMS.

How did you end up working with BEAM technologies?

After leaving Edisoft, I started working in a company that developed a product for real-time communications using WebSockets, and this is where I got my first experience with high scalability systems and millions of concurrent connections: they were building a system that was similar to Erlang+WebSockets, and this was the first time I heard about this language. I was even told that if you spend enough time working around a system that needs fault tolerance, scalability, and high concurrency, you will eventually build your own version of Erlang. And this is what I feel they ended up doing, only from scratch. A while after, I got requested for an interview with Miniclip to which I initially said no because —confesses a little embarrassed— I didn’t like the syntax of Erlang and I felt too comfortable with Java. Then I realized these kinds of things never had stopped me in the past and gave it a shot. I got the chance to lead the backend development for Soccer Stars initially, and later for Agar.io, both were hit games at Miniclip, after which, still at the company, I moved to work in engineering-first teams. In 2017, I got to attend the Erlang User Conference, in Stockholm, and I ended up getting even more involved with Erlang (that conference was a pivotal moment for me). I got to meet Joe Armstrong, Robert Virding, Francesco Cesarini and all the “big” guys. At the time, I knew nobody else from the community, apart from those whose books I had read. I was very happy to be part of it, and I gradually got more in contact with the community and contributing to open source, which I now do regularly even for the EEF maintained repositories.

Is there anything in Erlang/OTP that sold you even more after you got started?

Most things sold me. For example, pattern matching. I was working heavily with JavaScript before, and even though it’s a multi-paradigm language, and you can have functional, you don’t have pattern matching, and that’s a huge part of Erlang. It took me quite a while to understand two things properly: the first being what the “let it crash” philosophy meant. And the second one, which is very attached to the first one, was error handling. If there are errors and you know that they will occur, you better handle them, but do it in the right context; if you can’t handle them, don’t worry, although when we say let it crash, we don’t mean “let the application die”, rather we’re referring to processes that run in the app. Used correctly in Erlang, error handling is something that I love to explore and keep fostering. The first piece of software that I wrote for Erlang was not useful software, it was just a basic test: I wanted to see how amazed I would be about this lightweight process mechanism everybody was always talking about. I wrote a very simple script that launched a million processes, and they all died after doing nothing. And it ran really —really— fast, without using many resources. I tried to do the same with Java, and it was super slow: concurrency is a big part of what I love, but I also love performance, and Erlang gives me that. As a CI and static analysis aficionado, one other thing I have to mention that was really nice to find out-of-the-box was dialyzer. I absolutely use it always.

Are you learning something new at the moment?

I started learning Elixir a few months ago for two main reasons: the first one is that it is not very easy to recruit Erlang-first developers, so we’re looking into Elixir developers to be able to have a broader search scope. Also, there are some things about Erlang that I would like to see improved, out-of-the-box, like documentation and formatting, and Elixir gives us those. The second one is to not get tied to a single language. There is a big community around Elixir that I want to explore if possible. It is also very interesting to see the similarities between Erlang and Elixir communities and the way they interact. I’m also learning of some of the difficulties of adopting OTP 24 because in this shared technology stack that my team does, one of the goals is to keep on top of the latest technologies.

First of all, people are very welcoming, and I feel that it’s good to be there. And secondly, many of them give away their free time and energy in order to build something that they like and believe in, and that benefits others. And this kind of interaction is unbelievably rewarding. I’m a regular participant in the Erlanger Slack, as well as some projects like elvis_core, erlcloud, and setup-beam. I feel other members of the community always want to understand what’s the problem you’ve been trying to solve, and always want to help. Sometimes they solve an issue for you —or with you— and you realize that you wouldn’t have solved it otherwise. I’m a strong believer in the OSS development model, and I love collaboration. I like the fact that together we can build something. Even if you’re working alone in a lab, somebody built that lab and the instruments you work with. I try to give back as much as possible because I strongly believe that collaboration is a two-way street, which is why I’m now organizing SpawnFest 2021 with other members of the Erlang community: Bryan Paxton, Pablo Costas Sánchez, and Filipe Varjão. And finally, I want to take this opportunity to thank Brujo Benavides for all the help he gave us setting up the initial structure for this year’s SpawnFest, and together with Bryan Paxton for getting me personally so involved in the community as I am.

We’re eager to hear your stories, please share them at marcom@erlef.org!