Getting to know - Evadne Wu 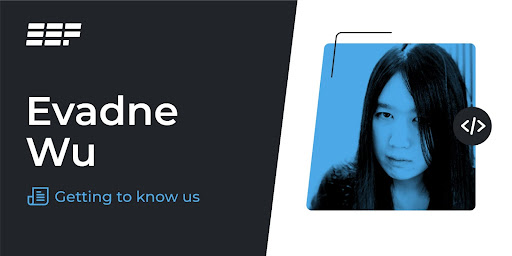 Welcome to another edition in our getting to know us series. Getting to know us consists of articles and interviews about a wide variety of people in our ecosystem, with the main goal of making their work with BEAM technologies visible. Some have been around a long time, while others may seem new to you, but they all share a love for this ecosystem. If you know of interesting work that deserves more visibility, let us know at marcom@erlef.org !

Getting to know Evadne Wu

Evadne Wu is a software engineer, a member of the Erlang Ecosystem Foundation, and a great contributor to the ecosystem. She has been responsible for several projects that enriched our community and has given many talks at international conferences, such as Code BEAM and ElixirConf. And today, we get to know her.

I have always liked to tinker and create, and software is the most malleable medium to express ideas. Therefore, I have chosen programming. In the past years, I have taught programming to many people and learned from many more, and I would like to continue doing the same in the future.

What made you choose to work with BEAM technologies specifically?

My first introduction to Erlang/OTP was by word of mouth. When we experienced a concurrency problem in one of the systems that my team was developing, a fellow engineer suggested that we should take a look at Elixir and its ecosystem and see what it could offer. We ended up successfully creating the prototype with Elixir. Encouraged by the success, I have then started to study Elixir and Erlang/OTP in depth. It was of great help that the community was friendly and helpful and that I was able to grow with it, as Elixir gained wider acceptance around the world.

This would be the project in which we were to create a system that can intelligently identify near-duplicate documents. Originally, we adopted the SimHash technique to deal with the problem, but the implementation was too slow and unsuitable for the purpose. Therefore, we had to write the program again, but this time in Rust, and expose the core functionality as a NIF which can be called from the Elixir side. This was an interesting learning experience for the engineers working on this project, as we haven’t had to create NIFs before and did not have knowledge of Rust.

What are some of your favorite technical highlights in Erlang/OTP, Elixir, etc. that have occurred over the past few years?

We were pretty satisfied with what came out of the box since our first day with Elixir. However, several improvements within Erlang/OTP were quite helpful for us, especially the increased performance in Erlang/OTP 24 thanks to the introduction of a JIT compiler. Additionally, native atomics and counters were also very helpful for our use cases.

What excites you about the future of Erlang/OTP, Elixir, etc.? Is there anything you are particularly looking forward to?

With wider adoption, ease of attaining raw compute performance will be the next flagpole feature in my opinion. This can either be achieved by allowing the developer to create sensitive functions in another language and linking them in as NIFs, or enhancing the performance of the BEAM to allow such functions to be implemented natively.

Are there any projects being developed at the moment that you think to deserve special mention?

Many projects are created every day, and I love them equally. However, I would say check out the winners of Spawnfest 2021, there are some really intriguing entries.

You have made great contributions to the ecosystem, such as Ecto and Packmatic. If you had to describe what these projects mean to you today, what would you say?

These projects solve invisible problems that exist in established applications, which the users would otherwise live with. Only when carefully examined would these problems be noticed; these inefficiencies, then, can not be un-seen.

You were a judge at SpawnFest 2021, can you tell us what interested you in doing so?

I was asked by the organizers whether I would be interested to help them as a judge. It felt like a good learning opportunity, especially given that all BEAM languages were allowed last year.

Why did you decide to join the Erlang Ecosystem Foundation, and what do you like about working with the community?

I was asked to join as a member and pay the annual fee to help fund projects. However, my membership has not impacted my view of the community at all. Membership in the EEF is not a prerequisite for full participation in the community, in fact, this is a very good aspect of the community.

We're eager to hear your stories, please share them at marcom@erlef.org !